Fishing is Good for Your Health

Add to wishlist Add to wishlist
Black Ceramic Beveled Band with Dark Brown Deer Antler - 8mm
6 reviews
You're looking for an antler ring, expecting to find a titanium metal with white antler inlay. But then you see this, and it catches your eye. Why not kick it up a notch and be truly different? It still symbolizes your favorite hobby and the animal you love to hunt, but it sets you apart from everyone else. This ring is you, you just didn't realize it until now.

Add to wishlist Add to wishlist
Ombre Deer Antler Inlay Ring Titanium - 8mm
2 reviews
A titanium edge with the ombre inlay make a beautiful and unique combination. The Ombre style has gradations of light to dark, making it even more different. You have your favorite animal to hunt - but you can't do it every day. So bring this antler inlay ring home today! It's a ring you'll love to wear, always.

If you are in the beginning stages of ring shopping, please bookmark the page and return when you are ready.

We promise to never push but always be here for you if you need assistance.

Every country princess has her own special fairy tale that doesn't involve a knight on a white horse. It began when she first saw her Daddy leave the house long before the first light of day, dressed from head to toe in hunting gear. With his gun strapped on his back, he almost seemed like a soldier. When he returned well after sunrise, he brought venison for his family. The princess ate roll-ups that evening for dinner, amazed that her Daddy had provided the succulent meat just that morning. When the princess began growing up, her prince arrived, dressed in camo of his own. It took a long time for him to get Daddy to lower his rifle, but eventually the ice was broken and they shook hands.

Her prince helped her up into his truck, but after the first few times she didn't need the help. He drove her around the back roads for hours because he knew she loved to ride. She made fried chicken for their picnics because he loved her chicken so much. They had bonfires in a wide open field, just the two of them, and danced together in the moonlight. They went fishing together. And when hunting season came around, she borrowed Daddy's hunting gear and went hunting with her prince.

Combining camo and diamonds is the perfect blend of a country girl's life and the beauty of love, so he decided to buy her a ring with a diamond and her favorite camo pattern. The ring symbolized both their love for each other and their way of life.

Camo wedding ring sets with real diamonds are beautiful to every country princess (and her prince). It's your lifetime ring and you want to have a real stone in it. You want only the best.

We are growing our collection of matching sets with diamonds but we wanted to show you the one style that's been the most popular. It's Mossy Oak, too! This email has been registered!

Let customers speak for us

We bought my husbands wedding ring from them and it was great but my husband accidently lost it while hunting so we had to order a replacement and the second one was just as good as the first. Fast shipping and great communication. 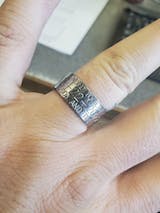 Thank you for the real tree wedding set I ordered. It was made within the time that was stated even though i changed the engraving while it was in production. I am please with the look of the set. They match perfectly. I hesitate to order on line as you real don’t know what the final product will be but after reading the company’s story and why the started making jewelry to begin with I thought I would give them a try as they could make exactly what I was looking for. I thing they did a wonderful job making the set. I will find out how I did picking out what I thing she would love for a wedding band set a little later. I believe it will be perfect for her as we got closer by hiking, fishing and hunting together.
Thank You Camoeverafter
Paul
A happy customer 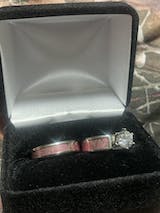 Was so happy to receive this and see its quality! My soon to be Huns and and I love the mountains and this really captures the essence of us. I even had it engraved…see the photos it turned out awesome! Originally I was going to get him a Claddagh but having the sentiment engraved on this ring was even better! It has a nice weight to it and looks great can wait till the wedding! 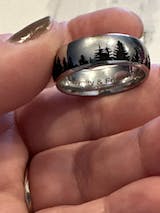 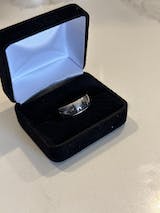 The ring is great but looks much bigger in your picture. The tread pattern is so small. Great quality though. Just wish it was bigger than 9mm. 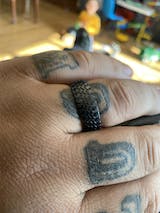 I had it engraved and still received it in record time. The ring is absolutely beautiful. I am so impressed with it. It's a Xmas present and I know my husband will love it too. I highly recommend buying from Camo Ever After. 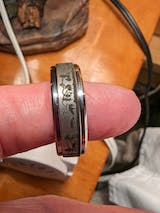